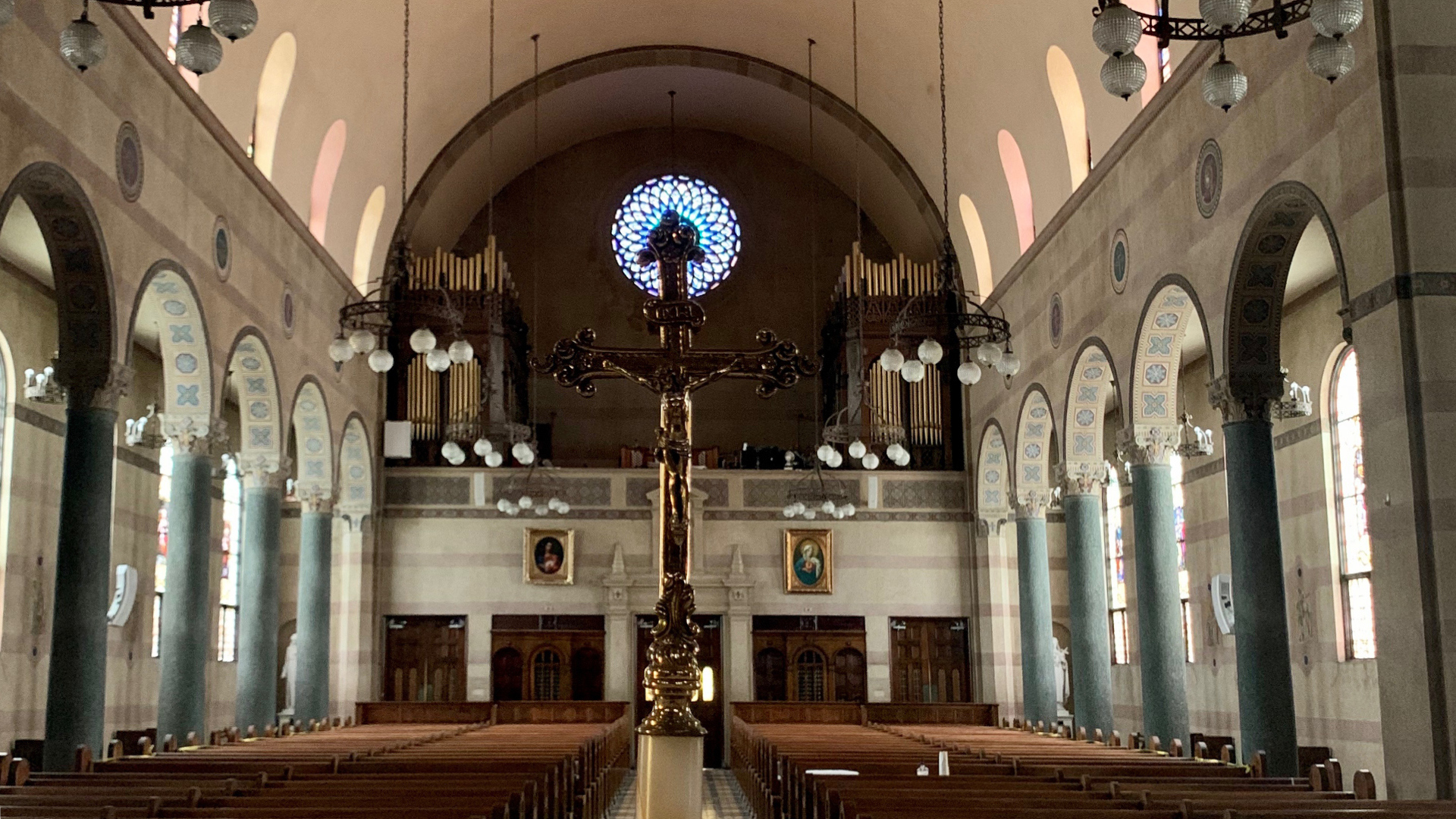 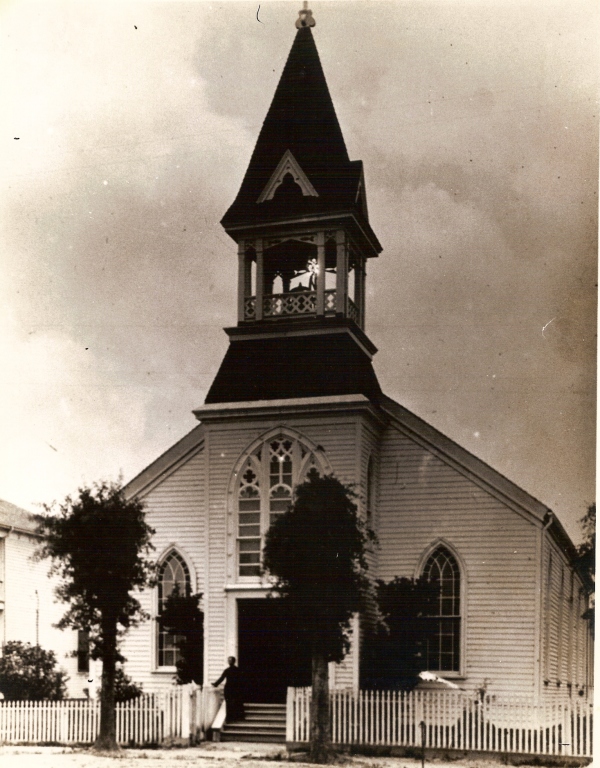 (In 1967, two sisters, Bernadette Greenwood Oldemoppen and Genevive Greenwood Spafford, wrote a history of St. Mary's Parish to mark the occasion of the parish's 100th anniversary. This synopsis is taken from that history.)

"In 1867, just after the Civil War, Mobile was in the process of reconstruction. In March of that year, Bishop John Quinlan, second bishop of Mobile, recognized the need for a parish in the "outlying western section of Mobile." He appointed the Rev. David O'Meara to establish the parish.

During the organizational period of the parish, the infirmary of the Old Catholic Boys' Home on Lafayette Street was used as a chapel. The original church, donated on the corner of Lafayette Street and Spring Hill Shell Road, was a white frame building, dedicated November 29, 1868.

A parish school was begun in 1871, staffed by volunteer lay teachers until the Sisters of Mercy were brought from Ireland. The hall at the rear of the sacristy was converted into two classrooms. Seven pupils enrolled in the first class: five Zimlichs and two Keegans. The school continued to grow so that by 1910 the brick school and convent were built across from the present rectory. The cost was $20,000.

Rev. O'Meara was succeeded as pastor by the famous "poet-priest," Rev. Abram Ryan (1877-1882.) One of Rev. Ryan's poems written during these years was a tribute to St. Mary's. The Rev. Michael Filan served 14 years at St. Mary's and was succeeded by Rev. Thomas Eaton. Rev. Eaton oversaw many changes and tremendous growth during his tenure at St. Mary's. By 1913, such growth had taken place in west Mobile that a mission church was built in Chrichton - St. Catherine of Siena - dedicated February 1, 1914. In 1920, another portion of St. Mary's became a parish - St. Joan of Arc. 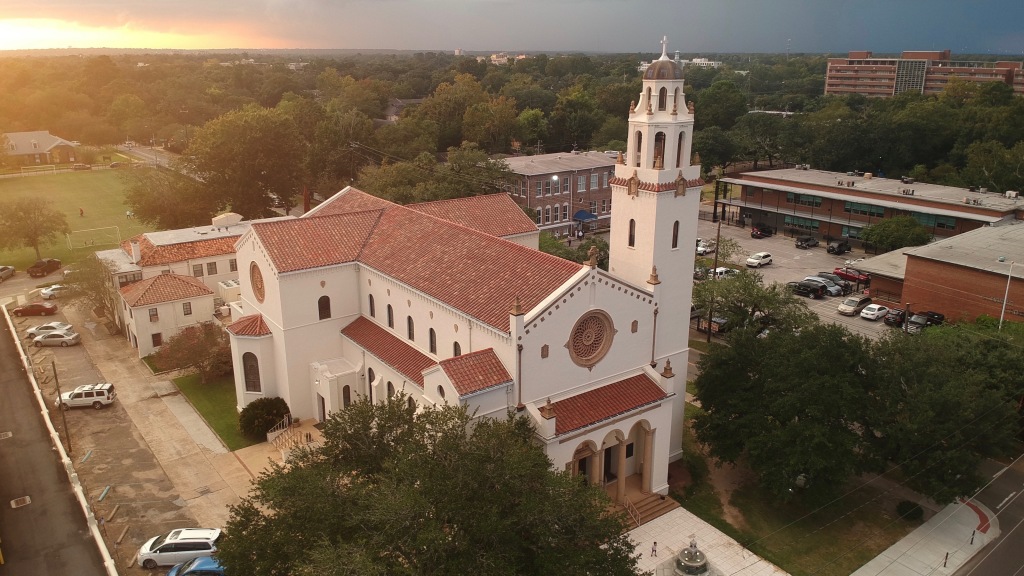 Construction of the present church was begun in 1926 with Mr. John J. Cary as supervising architect. The old church was moved across Old Shell Road and used as a parish hall. The present St. Mary's Church was dedicated on February 5, 1928. Monsignor Eaton died September 21, 1929, and was succeeded by the Rev. Msgr. John R. O'Donoghue, V.G., P.A., who paid off the construction debt in 1945.

Msgr. O'Donoghue died July 1, 1962 on vacation in his native Ireland. He was succeeded by the Rev. Msgr. Thomas Cullen, P.A. who renovated the sanctuary after Vatican Council II. Following Msgr. Cullen as pastors were Rev. Msgr. Daniel Harnett (1972-1982), Rev. John Aherne, V.G. (1982-1993) and Rev. Msgr. Kenneth J. Klepac (1993-1999.)  Rev. Msgr. Klepac began the development program at St. Mary Parish and hired the Archdiocese of Mobile's first parish director of development.  The program was established to unite the chuch and school as a parish and to involve people in the mission and vision of the parish's future."

(The continuation of St. Mary's history found below is taken from Michael Mastro's History and Stained Glass Tour. Copies of this full color brochure can be obtained from the St. Mary Parish Office.)

"During the pastorate of Msgr. Peter Cunningham (1999-2011), St. Mary Parish launched in 2000. the "Celebrating the Past....Building the Future" Campaign raising $1.4 million for renovations including: St. Mary's historic church organ and choir loft, a completely upgraded electrical system and improved lighting, and a new church roof. St. Mary Catholic School gained a new state of the art science lab, a completely renovated kitchen with new equipment, and a new administrative suite and reception area. The shining glory of the capital campaign was the restoration of the Sisters of Mercy 1909 Building. The building was in great disrepair as its use dwindled after the new school was built in 1949. The campaign allowed for the bottom floor to become the new preschool for three- and four-year- old students. The second floor was renovated to include three glorious reception rooms and administrative offices for the parish. The renovated buildings were blessed by Archbishop Oscar Lipscomb on November 16, 2003. As the parish continued to grow, so did St. Mary Catholic School as it moved quickly from one classroom per grade to two. The parish realized it faced a pivotal point in its history. Without additional classrooms, families would be turned away. With great leadership by the parish council, the school board,and a development advisory board, the parish decided to renovate the top floor of the Sisters of Mercy Building as the new home for St. Mary's Middle School. The renovations, completed in 2006. brought the school back full circle to its glory days. Currently, St. Mary Catholic School has an enrollment of more than 500 students from three year old preschool through eighth grade.
In the fall of 2009, St. Mary Parish launched the “Our Faith, Our Hope, Our Future” Capital Campaign. This campaign, with a goal of $1.8 million, provided funds to restore our historic church including restoration of the precious stained-glass windows, kneelers and church ceiling, and the installation of a new sound, HVAC and fire alarm system. The campaign also paid down the $700,000 debt incurred in campus improvements to the school buildings. The campaign officially closed in 2015.

In February, 2011, Msgr. G. Warren Wall was named St. Mary’s pastor. Msgr. Wall continued the projects of the campaign. The Church Bell Tower and Cross was were added as projects to the church restorations. The completion of the projects for the church took place in Fall of 2014 with a dedication of the restored church  on December 7, 2014"

On March 25, 2017, St. Mary Parish celebrated its 150th Anniversary. For the entire year prior, St. Mary hosted events to celebrate its rich history including an old fashioned Lawn Party mirroring the Lawn Party thrown by parishioners at the original dedication of the church; a dinner dance in the school gymnasium, celebratory Mass, and construction of a Spanish style fountain in the plaza in front of the church.